For a while now I have been making the same things, fat head pizza, chicken wrapped in bacon, etc  and I needed a change, I noticed that someone had posted the idea on fb of using a chicken breast as a base for pizza and seeing how I do like hunters chicken I thought I would give it a try. I made this with the BBQ sauce from the previous recipe and it worked so well, I will be serving this next time my friends come to supper.

For each person you will need:

A portion of BBQ sauce 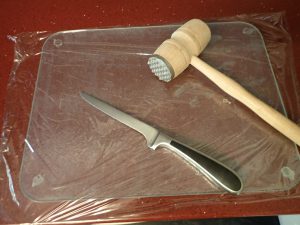 You will need a cutting board covered in cling film, a sharp knife and a kitchen (tenderising )mallet or a rolling pin. 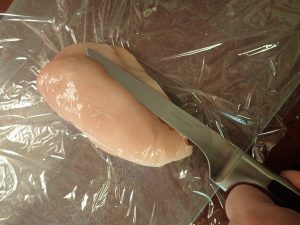 Place the chicken breast onto the cling film on the cutting board ( You do not have to put film on your board but it makes clean up easier and prevents contamination issues) working from the thicker part of the long side use the knife to cut part of the way through the breast. Its not the end of the word if you cut all the way through but it looks better if you don’t , this is known as butterflying the meat. Open out the breast and lay it flat on the film covered board.

Cover the butterflied breasts with another piece of cling film. 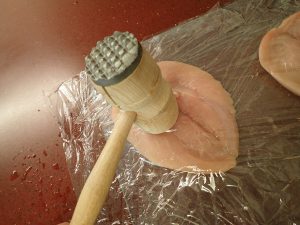 Start to bash the meat with the mallet, firmly enough to flatten it but not so much the meat tears and get holes in it. Keep hitting the meat in a pattern not hitting the same area twice in a row so it evenly gets flatter and spreads in size under the cling film. 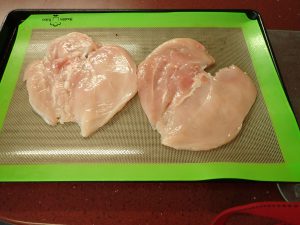 Transfer the chicken to the dish it will be cooked it, I have used a silicone mat for ease,but you could use greasproof paper or foil. 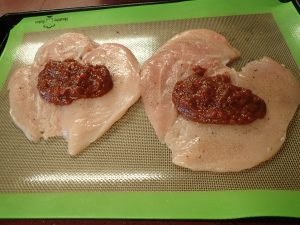 Top each chicken breast with a spoonful of BBQ sauce and spread evenly.

Put the chicken in the oven to cook, it won’t take as long as a whole breast would usually take as it is thinner so 10 minutes at gas 5 / 180 deg should do it and then top with cheese of your choice. 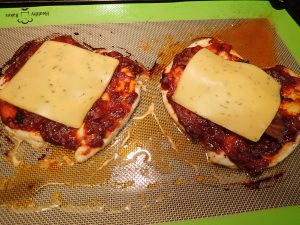 I have topped mine with a slice of Double Gloucester with herbs. But you could use mozzarella or cheddar.

Put back in the oven for another 5 mins till the cheese is melted and the chicken cooked through. 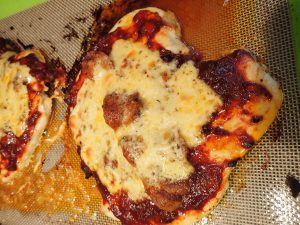 If you didn’t want to butterfly the chicken you could still top it with cheese and sauce and cook it for a few minutes longer,this is hunters chicken, but I find that bashing it flat makes it tender and melt in the mouth more and creates a more pizza like experience. you could always add pepperoni or more veg to the tomato sauce to make your favourite pizza topping.